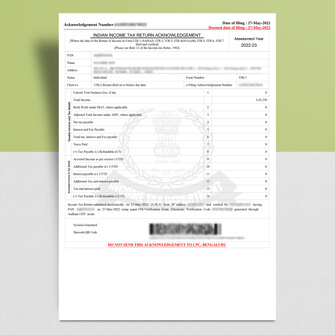 Income tax return filing for an individual with salary income of less than Rs.5 lakhs.

Income tax is levied by the Central Government on the income that is earned during a financial year by the individuals and the business. The taxes are considered to be a source of revenue for the government. The revenue that is collected from the source of tax is then utilized on developing infrastructure, proving better healthcare, education subsidies to the farmers or people employed in the agriculture sector, and also for the government welfare schemes.

Taxes in India are of two types Direct tax and Indirect Tax. The tax that is levied directly on the income is called Direct tax. For instance, Income tax is a direct tax and the calculation of the tax is based on the income tax slab rates that are applicable during a given financial year.

The income Tax Act in India has classified the taxpayers into different categories as different tax rates apply to the different types of taxpayers.

The taxpayers are classified as below:

Individuals are also classified as residents and Non-resident Indians. The resident taxpayers are liable to pay tax on the global income in India ( Both on income earned in India and Abroad). Whereas those who are identified as Nonresident Indians need to pay the taxes only on the income earned or that is accrued in India. The resident individuals are further classified based on their age group.

Which Income is subjected to Income Tax in India?

Everyone who is earning or gets an Income is subjected to pay Income Tax in India. Here is a simpler classification of the income that breaks the income for further understanding.

What are the income tax slab rates?

The income Tax law taxes all of these taxpayers differently according to the slab rates. For the Indian Companies and the firms, the taxes are computed based on the profits earned whereas for individuals, the Hindu Undivided Family and, the Association of Person and Body of Individuals the taxes are based on the slab rates prescribed by the Income-tax department. The 2020 budget made way for the New Tax regime for individuals and HUF taxpayers.

Income Tax was levied as per the old regime had 3 slab rates for the levy of the Income-tax which are 5%, 20%, and 30% of the income. Options are given to continue with this old tax regime where Leave travel concession, the house sent allowance, and certain other allowances can be claimed as deductions. In addition, the deduction for saving investments as per section 80C (LIC, PPF) to 80U can also be claimed. The Income-tax slab rates for the taxpayers under the old regimes are as follows.

By opting for a New Tax regime the deductions and exemptions are not allowed. However, the only exemption and deduction allowed under the new tax regime are:

In case of a specially-abled person transport allowances are allowed

Any compensation that is received to meet the cost of the travel on tour or transfer.

The daily allowance that is received to meet regular expenditure occurred in the absence of the regular place duty.