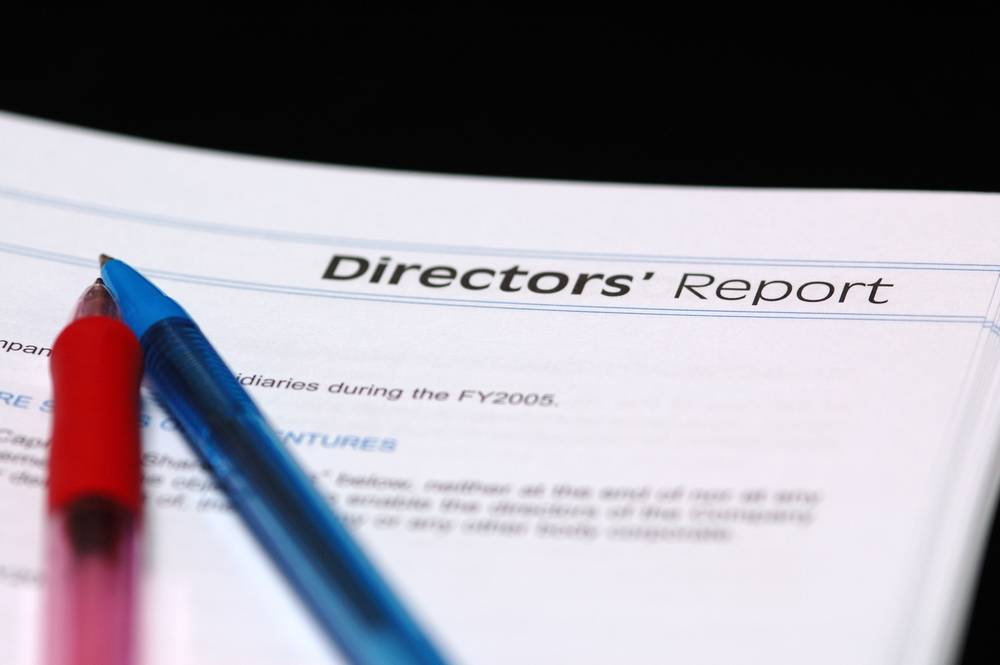 All Companies registered in India are required to conduct an Annual General Meeting and file the company annual return with the Ministry of Corporate Affairs. In the Company’s Annual General Meeting, the Board of Directors of the Company are required to present the Directors Report to the shareholders along with audited financial statements and Auditor’s report. In this article, we look at a Directors Report Format that is acceptable under Companies Act, 2013.

On behalf of the Board of Directors, it is my pleasure to present the XXth Annual Report of Company Name (“the Company”) together with the Audited Statement of Accounts for the year ended March 31, 20XX.

The Company has recorded the following financial performance, for the year ended March 31, 20XX:

In Case of Profit

In Case of Loss

In Case of No Activity

The Company is engaged in the business of:

There has been no change in the business of the Company during the financial year ended 31st March, 20XX.

In case Dividends were Declared

Your Directors are pleased to recommend a dividend of Rs.XXX per share for the current financial year. The dividend if approved and declared in the forthcoming Annual General Meeting would result a Dividend outflow of Rs.  XX and dividend Distribution Tax of Rs. XX aggregating a total outflow of Rs. XXXX..

In case Dividends were Not Declared

Details of Subsidiaries, Joint Ventures or Associate Companies (Only if applicable)

The Company does not have any Subsidiary, Joint Venture or Associate Company.

In case Company has Subsidiaries, Joint Ventures or Associate Companies

The names of companies which have are subsidiaries, joint ventures or associate companies during the year under review is provided below:

The Company has in place adequate internal financial control with reference to financial statements. During the year, such controls were tested and no reportable material weakness in the design or operation was noticed.

There has been no change in the constitution of Board of Directors during the year under review i.e. the structure of the Board remains the same.

In Case of Changes to Board of Directors

The following changes have been made to the Board of Directors of the Company during the year:

In view of the applicable provisions of the Companies Act, 2013, the Company is not mandatorily required to appoint any whole time KMPs.

Meeting of Board of Directors

The observations of the Statutory Auditors, when read together with the relevant notes to the accounts and accounting policies are self explanatory and do not call for any further comment.

In case of Adverse Remark or Qualified Report

The Company has not made any investment, given guarantee and securities during the year under review. There for no need to comply with provisions of Section 186 of Companies Act, 2013.

In case Company has Made Loans and Investments

Details of Loans, Guarantees and Investments covered under the provisions of Section 186 of the Companies Act, 2013 are given in the notes to the Financial Statements.

The extract of Annual Return in Form No.MGT-9 as required under Section 92 of the Companies Act, 2013 for the financial year ending March 31, 20XX is annexed and forms part of this report.

All related party transactions that were entered into during the financial year ended 31st March, 20XX were on an arm’s length basis and were in the ordinary course of business. Therefore, the provisions of Section 188 of the Companies Act, 2013 were not attracted.

Also, there are no materially significant related party transactions during the year under review made by the Company with Promoters, Directors, or other designated persons which may have a potential conflict with the interest of the Company at large. Thus, disclosure in Form AOC-2 is not required. However, the disclosure of transactions with related party for the year, as per Accounting Standard-18 Related Party Disclosures is given in Note no 24 to the Balance Sheet as on 31st March, 20XX.

In case of existence of related party transactions

The particulars of contracts or arrangements with related parties referred to in sub section (1) of section 188 entered by the Company during the financial year ended 31st March, 20XX is attached in prescribed Form AOC-2 and forms part of this report.

Conservation of Energy and Technology Absorption

The particulars as required under the provisions of Section 134(3) (m) of the Companies Act, 2013 in respect of conservation of energy and technology absorption have not been furnished considering the nature of activities undertaken by the company during the year under review.

In case company is into manufacturing

The information pertaining to conservation of energy and technology absorption, as required under Section 134 (3)(m) of the Companies Act, 2013 read with Rule 8(3) of the Companies (Accounts) Rules, 2014 is furnished in Annexure and is attached to this report.

The company had a total foreign exchange earnings and outgo as provided below during the year ended 31st, March 20XX:

The Company has developed and implemented a risk management policy which identifies major risks which may threaten the existence of the Company. The same has also been adopted by your Board and is also subject to its review from time to time. Risk mitigation process and measures have been also formulated and clearly spelled out in the said policy.

The Company has not accepted any deposits during the year under review.

No material changes and commitments affecting the financial position of the Company occurred between the end of the financial year to which this financial statement relates and the date of this report.

In case of any material changes or financial occurrences

The following material changes and commitment occurred during the year under review affecting the financial position of the Company.

Significant and Material Orders Passed by Regulators, Courts and Tribunals

No significant and material order has been passed by the regulators, courts, tribunals impacting the going concern status and Company’s operations in future.

In case any orders were passes

The details of a significant material order passed by the Hon’ble High Court which may impact the going concern status of the Company and its future operations is provided in Annexure and forms part of this report.

During the year, the Company spent an amount of Rs.XXXX identified as CSR activities. The Annual Report on CSR activities is enclosed as per prescribed format as Annexure and forms part of this report.

If CSR Provisions are Not Applicable

CSR provisions are not applicable for the Company.

The Company is committed to provide a safe and conducive work environment to its employees. During the year under review, there were no cases filed pursuant to the Sexual Harassment of Women at Workplace (Prevention, Prohibition and Redressal) Act, 2013.

Your Directors state that no disclosure or reporting is required in respect of the following items as there were no transactions on these items during the year under review:

Pursuant to Section 134(3) (c) of the Companies Act, 2013 the Board of Directors of the Company confirms that-

Your Directors would like to express their sincere appreciation for the assistance and co-operation received from the customers, employees, banks, Government authorities, vendors and members during the year under review.

For and on behalf of the Board

Minutes of Meeting Minutes of Meeting Minutes are an official recording of the proceedings of a Board Meeting or Annual General Meeting or any other meeting and the bus...
Incorporation of Private Limited Company Incorporation of a Private Limited Company A Private Limited Company is one of the most popular type of business entity to conduct business in Indi...
Form ADT-1 Form ADT-1 Form ADT-1 is filed by every company to intimate the Registrar of Companies regarding the appointment of an auditor. Filing of Form ADT-1...
Compulsory Share Transfer Compulsory Share Transfer A shareholder can transfer shares held in a private limited company, subject to the shareholder's agreement and articles of...
National Financial Reporting Authority (NFRA) National Financial Reporting Authority (NFRA) - Rules & Powers The concept and composition of the National Financial Reporting Authority (NFRA) w...