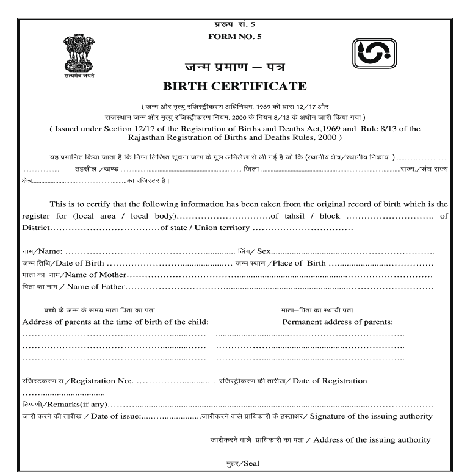 What is a Birth certificate?

A birth certificate in India is a permanent and official record of the child’s existence. A child who is not registered at birth is in danger of being denied the official identity, a recognized name, and nationality. This certificate also plays an important role in the nation’s development as registering a birth helps in collating the data on the vital statistics. This is an essential element while planning national policies for children as it provides a proper demographic base.

Registration services are decentralized spreading across all the States and the Union territories with more than 200,000 registration centers. Most of the centers are in the rural areas and about 2% in the urban areas. The Registration General, India is the central authority for unifying and coordinating the registration work in the country and at the state level, each state has a chief Registrar of Births and the Deaths who have the overall responsibility of coordinating, unifying, and supervising the work of registration. These local registration centers are managed by the Registrars and sub-registrars of the Births and Deaths who are at the grass-root level.

When to register to get a Birth certificate?

The birth certificate has to be registered with the concerned local authorities within 21 days of the occurrence, by filling up the form prescribed by the Registrar. A birth certificate in India is then issued once the verification with the actual records of the hospital. If the birth has not been registered within the specified time of the occurrence, the certificate is issued after due police verification ordered by the revenue authorities.

The format of the affidavit is available at the Registrar’s office and also with a notary. During the procedure, the Registrar will ask to deposit the late fee amount. Then a self-attested copy of the Matriculation Certificate, Aadhar card, PAN card if it is attached with the affidavit will help in seamlessly completing the process.

Rural Areas: The following officials are appointed as the Registrar of Births.

Registration Centres/ units in Government Hospitals: Additionally registration centers and units have also been opened in major Government hospitals, CHC’s and PHC’s in major states. The events that happen in the private hospitals and those hospitals where the registration units are not yet opened will be reported to the concerned Registrar of that area where the hospital exists. Such events will be reported by the concerned institution.

Urban Areas: The Municipal Health officer, health officer, or the equivalent officers that are appointed as the Registrar of the births and deaths. The medical officer who is in charge or the equivalent of the District Hospital, referral hospital, and the other government hospitals that have also been declared as the Registrar of births and deaths for the registration and the issuance of birth and death certificates for those events which occur in the premises.

How to apply for a Birth certificate?

Get a birth certificate registration form from the office of the concerned registrar. When the child is born in a hospital the form is provided by the in-charge medical officer. This form is to be filled and submitted to the registrar. The documents like the birth report and the identity proofs of the parents are required. On the completion of the birth records by the registrar, the birth certificate is issued to the applicant. Under the provision of Section 14 of the Act, a birth certificate is obtained without the name of the child. In such cases, the name can be entered by the concerned authorities without any charge within 12 months.