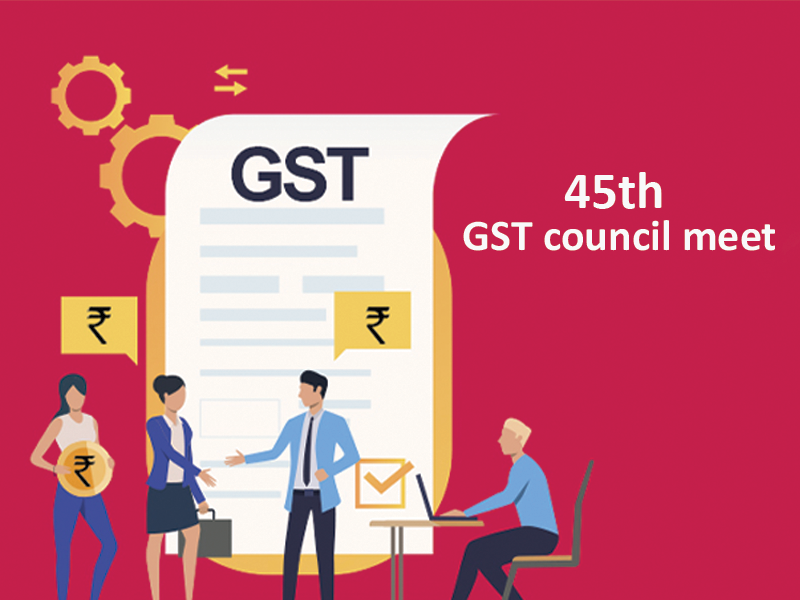 The Goods and Service Tax (GST) council held its 45th GST council meeting on 17th September 2021, at Lucknow, Uttar Pradesh. The meeting was held under the Chairmanship of Finance Minister Nirmala Sitharaman. The GST Council meeting was held physically for the first time after one and a half years of virtual meetings. Reducing taxes on life-saving medicines, bringing petrol and diesel within the ambit of indirect tax, rationalizing an inverted duty structure, and treating food delivery apps as restaurant services were some of the Key Highlights of the 45th GST Council Meeting.

The key decisions taken at the 45th GST Council Meeting is given here:

Concessional GST rates on Covid-related drugs, which were till September 30, have now been extended till December 31 only for medicines, but not for medical equipment. The details of recommendations 44th GST Council Meeting are given below:

GST council announced that the inverted duty scheme on the footwear and textile sector will be corrected from January 2022.

GST on Petrol and Diesel

The 45th GST Council Meeting took no final decision on the proposal to bring petrol under GST. The council announced that the issue of whether specified petroleum products should be brought within the ambit of GST was placed for consideration before the Council. After due deliberation, the Council was of the view that it is not appropriate to do so at this stage.

E-Commerce Operators are being made liable to pay tax on the following services provided through them:

Regarding E-Commerce Operators and gig offices, it has been decided that since the place where food is delivered will be the point where tax is collected, the E-Commerce operator who will be collecting tax will pay up the GST. The GST council now announced that there is no new tax. Previously the tax was paid by restaurants but now aggregators like Zomato and Swiggy will pay the tax.

GST Rate Changes on Other Goods

The clarification issued by 45th GST Council Meeting concerning the GST rate on goods are as follows:

Relaxation in the requirement of filing FORM GST ITC-04

Requirement of filing FORM GST ITC-04 under rule 45 (3) of the CGST Rules has been relaxed by 45th GST Council Meet:

Measures for streamlining compliances in GST