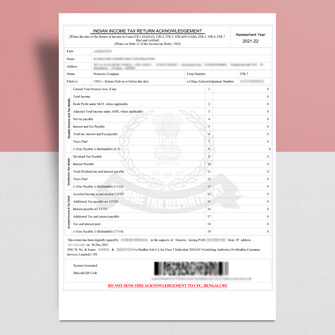 ITR 7 Form in Odisha is filed by the Companies that earn income from properties that belong to charitable or religious purposes. So the properties that are held under trusts or other legal obligations in parts or on a whole come under this category. The taxpayers can file Form ITR 7 in Odisha by furnishing a bar-coded form in a physical paperback form or using the digital signature certificate or even the submission of return verification through the ITR V Form.

Who is eligible to file Form ITR 7 in Odisha?

ITR 7 in Odisha can be filed by the following:

ITR 7 u/s 139 (4D) Schools, colleges, and institutions that are not covered under any section of the Income Tax Act are required to file ITR 7 in Odisha under this regulation.

What important instructions are to be followed for filing Form ITR 7 in Odisha?

The Income-tax department has outlined various methods through which the taxpayers can file their ITR 7 returns in Odisha.

Other Services in Odisha

ITR 7 filings in Odisha must be filed by the companies, firms, local authorities, etc who have income from the charitable and religious trust, Political party, research institutes, from college, universities, or khadi industries.
Assesses who are not claiming exemption under the Section 139 (4A), 139 (4B), 139 (4C), or Section 139 (4D) cannot file ITR in Odisha.
ITR 7 Form in Odisha is used when the assessee is any Trust, is filing as company, Firm, Local Authority, Association of persons, Artificial judicial person and has claimed exemption under 139 (4A,4B,4C,4D).
ITR 7 filings in Odisha should be done by July 31 by the assesses who are not required to get the accounts audited and the assesses who need to get the accounts audited need to file by 30th September.

Thank you for the registring the my trademark and for the seamless and hassle free service.

Great work by India filings. Special thanks to Ashok for continued support & guidance

She is really good at his work. She quickly register for my gst as well as udyam.